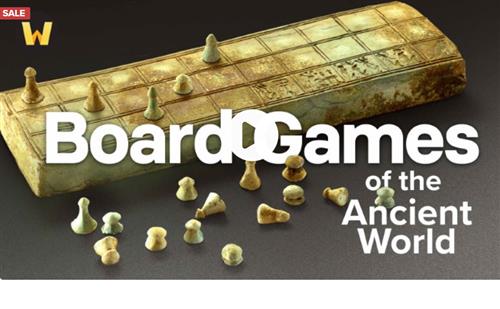 Are you among the tens of millions who play chess or checkers? Do you have great memories of playing Chutes and Ladders or Sorry! as a child? Chances are you have some type of board game in your home. Even with today's competition from video games and smartphone apps, board games are as popular as ever. And while the games themselves provide hours of challenge and enjoyment; their storied history can be even more fascinating. In Great Board Games of the Ancient World, your expert Tristan Donovan takes you on a journey into thousands of years of ancient cultures and intrigue as you learn about the fascinating backstories of the games we all love. With his passion for both history and gaming, Tristan not only teaches you the origins of the games we know today but also how to play (and win!) more than a dozen games in 12 fascinating lessons.

Board games are one of humanity's most ancient pastimes. For as long as people have been living and congregating together, they have been playing games with one another. Board games have been found dating back as far as 3,000 BCE, with some evidence going back as far as 5,000 BCE. They satisfy our competitive nature and our need to be challenged, but they also allow us to have fun and exchange ideas in a social environment. Consequently, while we tend to look at great works of art or marvels of engineering to understand ancient civilizations, often a simple board game can reveal just as much about who we once were—and who we are today.

Trying to prove ourselves better than the next person is a desire as old as humanity itself, and often a matter of life or death. But for the past 5,000 years, almost since the beginning of civilization, we've taken at least some of our battles to the game board. Again and again, players have tested themselves in games of strategy, where luck played no part—sometimes gambling for money, but always for the title of "best."

In Great Board Games of the Ancient World, you'll learn how to play some of the greatest strategy games that ever existed. With an average of 35 possible moves in any given situation, chess is known as one of the most challenging games ever created. But it is the game of go—with an average of 250 possible next moves—that is held in highest esteem in East Asia. While you will easily learn the rules of playing the game of go in this course, you'll also understand why it can take a lifetime to master.

Backgammon is another ancient strategy game, but it has added the element of luck. While the person with greater experience and knowledge will win more often over the long term, the element of luck means that a complete novice can still beat a much more seasoned opponent.

In this course, you will learn to play a variety of strategy games to test your wits, including:

Mancala. Still played around the world today, but especially popular in Africa, this group of games ranges from the simple awari, to the extremely complex bao. Mancala-style pits have been found dating to the Neolithic period, around 5,500 BCE, potentially making it the most ancient game of all.
Royal Game of Ur. An ancient Sumerian strategy game, the Royal Game of Ur seemed lost to history until cuneiform tablets holding the missing rules were finally decoded by archaeologists in the 20th century.
Merels. Strategy games for two players, these games are still played around the world today. In fact, you're very familiar with the most simplistic of the merels family of games—tic-tac-toe.

We buy our board games today in colorful boxes with standardized rules neatly spelled out. But throughout history when games were hand-crafted and carried from place to place—whether by merchants or warring armies—local people put their own spin on them, changing the rules a bit or the board itself to reflect their own locale and beliefs.

In this course, you'll learn about the fascinating histories of ancient games including:

Backgammon.The game known to the Romans as tabula morphed into many closely related games over the years before eventually becoming backgammon. To increase "the action," changes were made not only in ancient times, but as recently as the 20th century.
Chess. Chaturanga was a game of tabletop warfare created in India and starred replicas of the soldiers, elephants, horse riders, and chariots that gave the Gupta rajas their kingdom. Over time, those pieces came to be more abstract, and the queen was given the power to move all over the board—right around the same time that Europe found itself ruled by powerful queens, too.
Mancala. Awari and bao, two mancala games, traveled from Africa to the Caribbean and Arabia with the slave trade. Today, these games serve as fun activities as well as a record of the African diaspora.

The Ancient History of Your Favorite Childhood Games

Unlike so many other household items that are relatively new inventions, many of the board games in your house have an exciting and long backstory. For example, that set of checkers in the cabinet has a fascinating history that goes back 1,000 years to the ancient game called alquerque. It also seems related to kolowis awithlanknannai, a strategy game played by the Zuni tribe of North American Indians. In fact, many of the board games played by children today were played in one form or another by their ancestors 40 generations ago.

Who were those ancient players and what were their goals in creating games? Some of these board games involve strategy, some are pure luck, and some were originally developed to teach the players how to get into heaven. In this course, you'll learn about the surprising history of common board games including:

Chutes and Ladders. This game of luck, described today as appropriate for children as young as 3, was originally created to teach the path to spiritual enlightenment. Previously illustrated as snakes and ladders, the game was developed across the Indian subcontinent more than 2,000 years ago with a variety of boards to reflect the beliefs of the Hindu, Jain, and Sufi Muslim communities.
Connect Four. Unlike almost all the other games illustrated in this course, this strategy game is played on a vertical board. Looking very modern in its primary-colored plastic, it is a direct descendent of the merels family of strategy games, one of the most popular groups of games from the Middle Ages.
Sorry! This is a game of both luck and strategy for up to four players. It is a direct descendent of a game known as pachisi, developed on the Indian subcontinent about 2,000 years ago.

Far from being trivial or meaningless pursuits, board games reflect our attitudes about the deepest questions of life. Is our every move under the power of an omniscient creator who determined our fate before we were born? Do we rely on our own wits and skills to create our future? Are our lives just a matter of sheer luck? For the past many millennia, ancient and modern peoples alike have been contemplating these compelling questions, often fashioning their answers into seemingly humble board games.