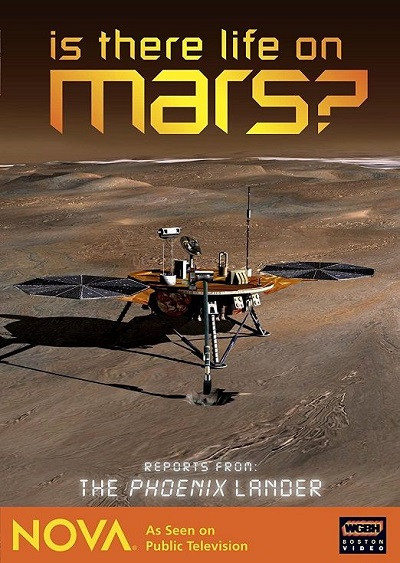 PBS Nova - Is there Life on Mars? (2008)
English | Documentary | Size: 1.50 GB
After four decades of fly-by probes, orbiters, landers, and rovers, the quest for life on Mars is as tantalizing as ever.

NOVA goes behind the scenes of the latest NASA missions to the Red Planet to reveal new clues and challenges on the road to answering this ultimate question.
With unique access to the NASA Phoenix and Mars Exploration Rover missions, NOVA shows scientists and engineers in action, directing the operations of spacecraft millions of miles away, as the robotic explorers drill into rock, claw into soil, analyze samples, and trundle across the rock-strewn landscape in search of signs that Mars once or maybe even still harbors some form of life.
They may not be on Mars themselves, but there is drama enough for the Earth-bound operators, as they must deal with harsh Martian conditions and equipment emergencies in pursuit of their science objectives. NOVA captures the payoff in stunning surprises that bring cheers to the science operations centers.
Four years after they landed on Mars, NASA's twin robot explorers, Spirit and Opportunity, have lasted 16 times longer and driven 20 times farther than expected. Today they are joined by an aerial armada of hi-tech satellites, surveying Mars from orbit to reconstruct the planet's mysterious history.
And on May 25, 2008, they've also got company on the ground: NASA's Phoenix probe, which dramatically tasted water ice on the planet. NOVA's "Is There Life on Mars" showcases the latest scientific revelations from a planet, once alien, now poised to reveal provocative new clues in the tantalizing quest to plumb its past for signs of water and, perhaps, even life on the Red Planet.

Written and Produced by Jonathan Grupper ; A NOVA Production for WGBH/Boston