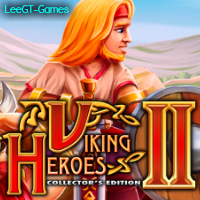 Viking Heroes II
Collector's Edition
Sometimes Viking heroes have quiet days. When this finally happened, the brothers Evarand and Boromir and their sisters Helga and Brunhilde went to a nearby settlement for the fair. Someone should sharpen their swords, someone should patch up their armor, someone should buy seeds of medicinal herbs, and just drink honey together. But it looks like the fair ended ahead of time. There were puddles and lava lakes around, and hot stones lay. It turned out that it was an ancient volcano that had awakened. Without thinking twice, the Vikings sat on the scruff of the Great Serpent Jormungand and without fear descended into the bowels of a huge volcano. This is how adventures of brave heroes full of dangers and unexpected turns begin ... The game has a mode without time.
There are no heroes mightier than the Viking, and no enemies more fierce. This is good news for the besieged inhabitants of Midgard and the surrounding realms, who need a group of champions to come to their aid after a long-dormant volcano awakens and spews its red-hot contents across the land. And it's bad news for the dark and destructive force that roused the slumbering mountain. Join the Viking brothers and sisters on an epic journey through a magical land as they come to the aid of the helpless and seek the one who's spreading destruction. Join forces with old friends to rebuild shattered villages, solve a perplexing mystery and complete simple quests for a multitude of colourful characters.

This is a new version in which the developer fixed the bug in level 8. July27th 2021.